What kind of impression do you have of all the classic yet timeless games you have played since childhood? We have to admit that classic games such as quiz with simple-yet-hard riddle and card tricks game never fail to trigger fun, anywhere, anytime.

In this Play Saturday event, we employed those classic games to bring festive atmosphere to our office. We played a series of amusing games for 4 hours, without even feeling tired because it was so fun. We laughed almost every 10 minutes.

The masterminds of this Play Saturday, Varief, Bagas, Vian, Eva, Nenes, Tika, and Rare, organized the game series. They also made us curious about what kind of games we were going to play. The curiosity stayed until the very last minute as we sat in the tribune at our office at 9 a.m., waiting for the game to start. The only clue we got was the title of this Play Saturday, Crazy Little Things. 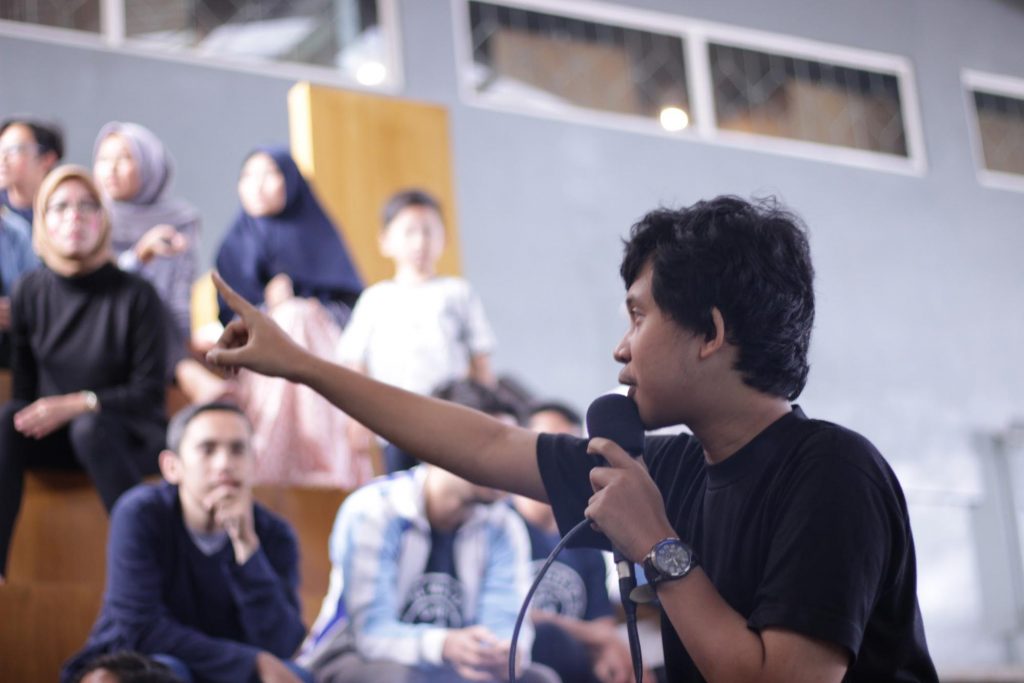 Vian, took the floor and acted as the game master, kicked off the the day by giving us a brief about the rules. Then came the first game, a relay race to build a card stack.

We were divided into four big teams. The first two people from each team came forward and built the base of the stack for 30 seconds. It was felt like a blink of an eye, then the next two persons came forward and continued building the stack. The card surface was a bit slippery, so it took a lot of effort just to make a two cards lean together steadily for the base of the upper layers of stack.

Teams 1, 2, and 3 used the same method to built the stack, making several cards lean on each other side by side steadily, but team 4 used a very different way. They folded several cards, so they could stand upright perfectly for the base of the stack. Then, they laid several cards on them and built next layer upward. What a brilliant way! Obviously, Team 4 won the first game. 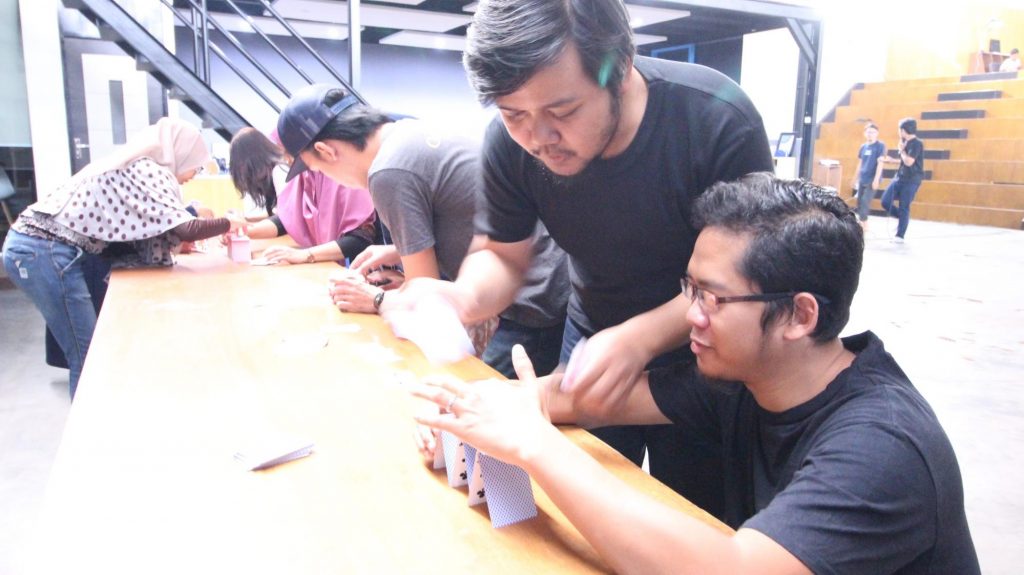 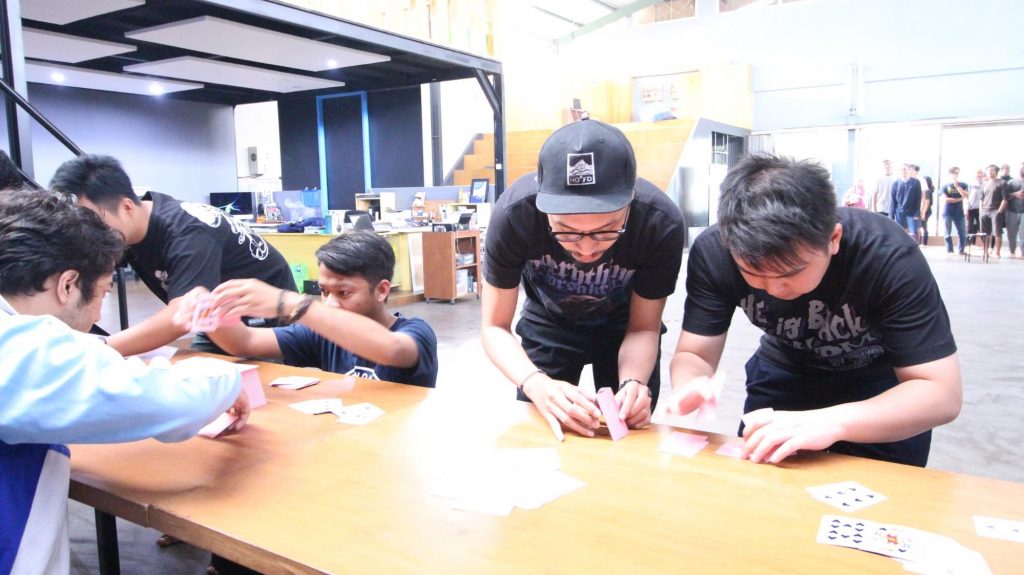 Then, we moved on to the next game. The Crazy Little Quiz. We remember the last time we played a similar quiz game a few months ago. It’s not easy to forgot the festive atmosphere the game brought. Everyone shouted their guesses passionately, similar to a big group of football supporters in a stadium.

And, then came the first question. On the wide projector in front of us, we saw a cropped photo of someone’s nose. “ Whose nose is it?”, it said on the next slide. Team 1 to team 4 discussed the answer before they submitted it to the game master consecutively. Then the cropped photo revealed itself and suddenly laughter burst everywhere. It was a picture of one of our friends that was taken from a funny angle, close-up from the lower chin, with a comical dazed expression.

Little did we know that behind our fond habit of taking funny pictures of our friends, selfies, and wefies, there are dozens of photos taken from ridiculous angles, with ridiculous expressions, worth keeping to be used in this game. The people we meet everyday at workplace looked so funny in those picture. The game went on with many hilarious cropped photos of eye and lips, even hands and fingers. Amazingly, one of the teams could guess the hardest question of a cropped finger correctly. 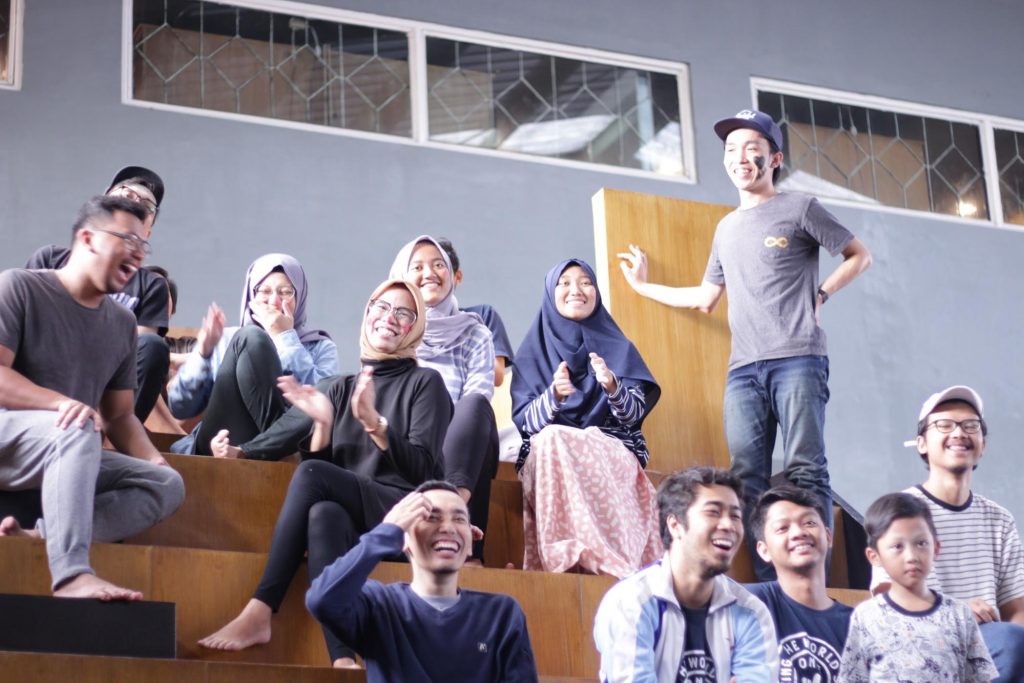 Everyone seemed to enjoy this ‘hard’ game. We had to match and remember the shape of certain facial parts of our friends. We ended up laughing so hard everytime the cropped photo revealed due to all the amusing poses and expressions on the photos.

Each team collected a score based on their correct answers throughout the second game. The team who got the lowest score was punished by the top scorer. Unluckily, team 3 would get a ‘punishment’ from team 4. “What is the punishment?”, we asked curiously. “The members of team 4 can draw on team 3 members’ faces”, game master answered.

First, we were a bit surprised with this punishment. We thought it would be something hard or dreadful. The next second, we became so excited by this ‘beautify your friend’ idea. The punishment sesssion went smoothly, filled with everyone’s boisterous laughter. We didn’t expect this childish punishment to be this amusing. The team who got punishment took picture enthusiastically, trying to look as cool as they could in frame. 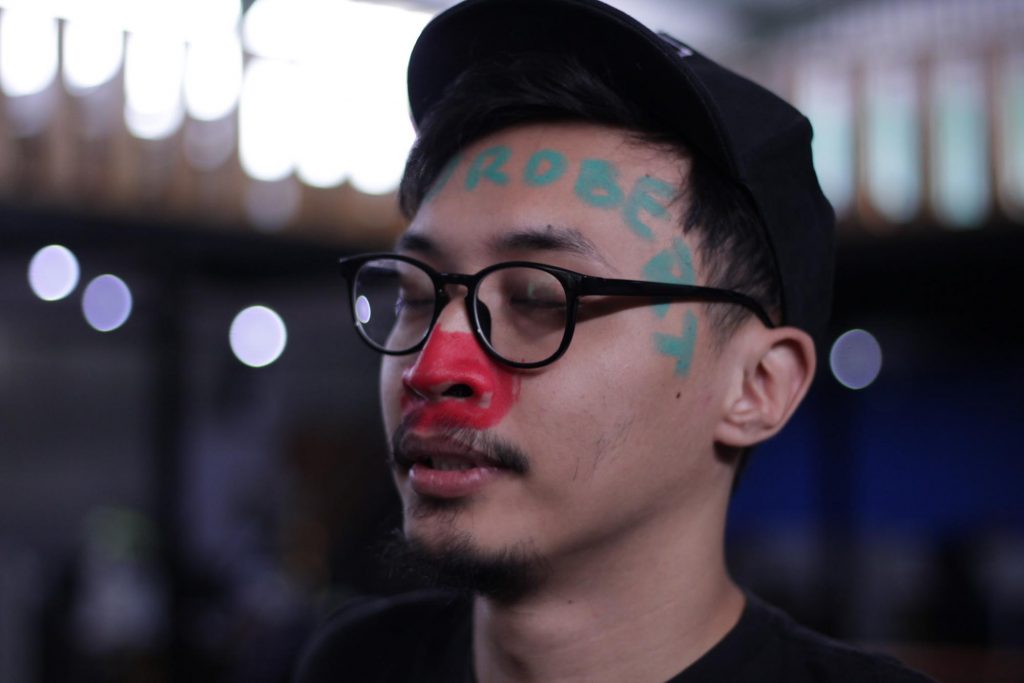 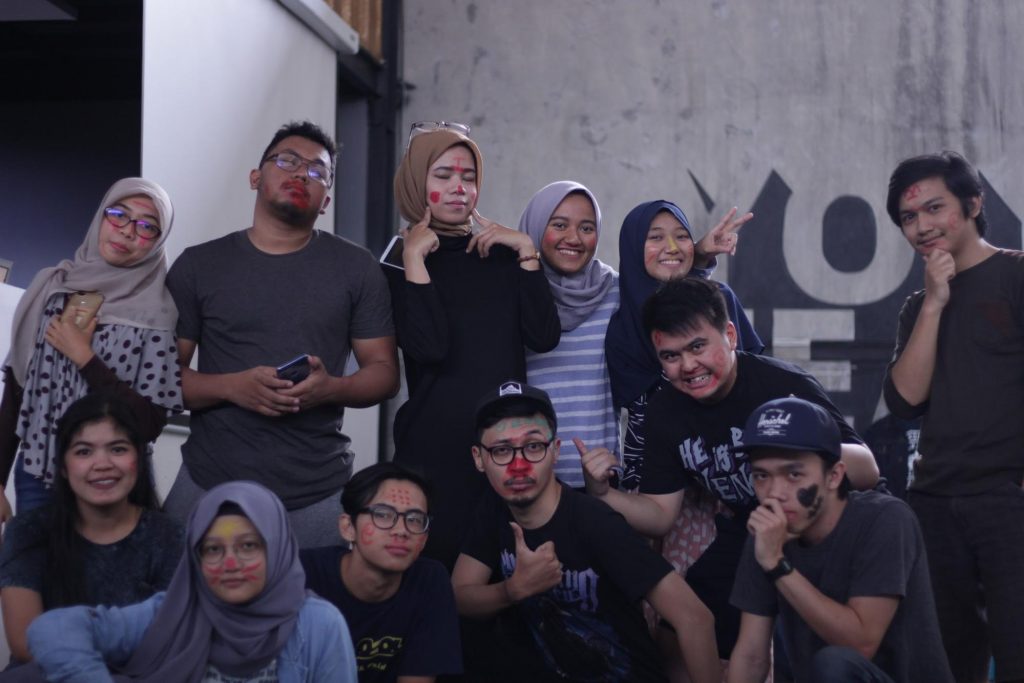 We moved on to the next game. This third game tested how good we are at observing details from a video. So, we watched a movie clip for about 1 minute. Then we were asked a question regarding a specific thing from the scene.

Questions like:
– What is the name of the place in the scene?
– How many strands of hair are on Patrick’s back (from Spongebob Squarepants)?
– how many rotors does the helicopter have from an avengers movie scene and many more.

Afterwards, the score result was announced again. Another punishment session was coming, and this time, team 4 was the team who got a punishment from team 3. We didn’t predict that the situation would reverse this dramatically. Again, laughter and excitement filled the air. The ‘drawing on the face’ session got even funnier. 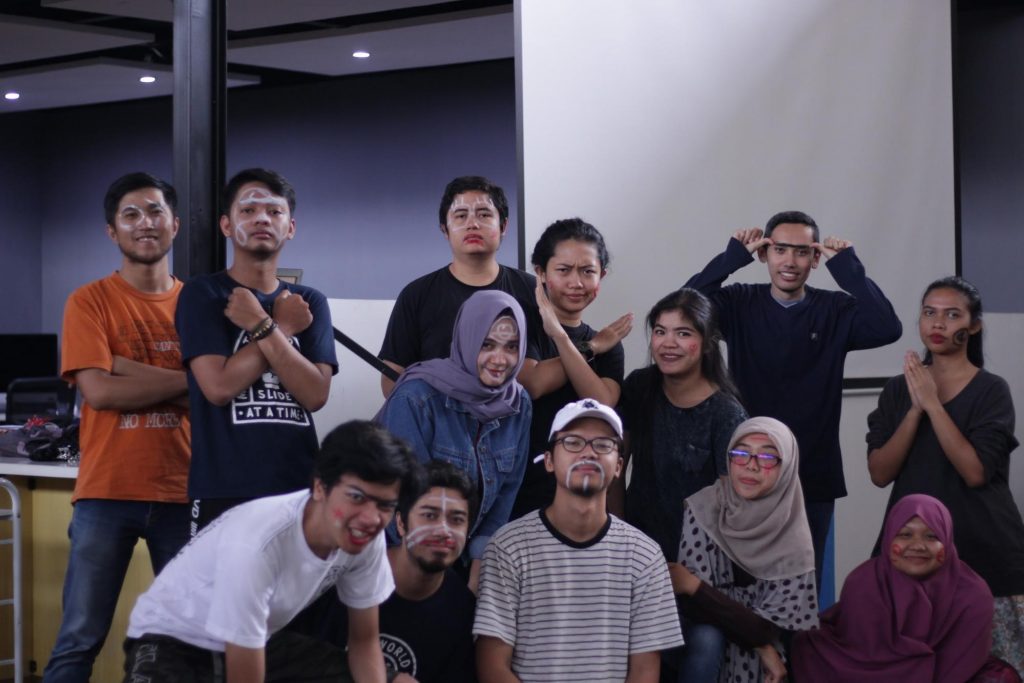 After taking a 20-minute break, we went on to the last game, macak konco. It is the Javanese phrase for ‘acting like your friend’. It is a 24slides’ traditional game which has been played since years ago and is always exciting every time we do it.
A group of newbie colleagues came forward and took a paper scroll with a person’s name written on it. They had to impersonate the person through specific gestures, such as the way that person walks or touches their hair, while the others had to guess who was being impersonated.

It is a great way to be more observant, especially to some of our colleagues whom we rarely work with. Likewise, we also got ideas of our unique gestures which we may be unaware of sometimes. Most of us shouted our guesses passionately while others looked like they were thinking hard. After 30 minutes of passionate guessing and laughter, the fourth game ended.

Salute to the the masterminds’ great ideas for this Play Saturday. Those simple yet brilliant games amused us to the maximum. Being more observant is a skill we learned throughout these games. However, the most important thing is there was so much fun, laughter, and great mood created to work better on the week ahead. Can’t wait for the next super fun Play Saturday. Yeaaah!